I moved to France when I was five years old. I’m half-Russian and half-Ukrainian. I grew up in social housing just outside of Paris. After I finished high school at 17, I started working as a model and pole-dancer for five years, to pay for Drama school.

2. So it was a bit like the school of hard knocks?

It was better than Drama school proper! Even though I paid for my acting classes by pole dancing, paradoxically, that was the best school. You’re basically on a stage and you have to play all these different women. It allowed me flourish very quickly. I started creating my own choreographies.

3. It must take a strong personality to make it on your own at 17…

I used to keep it a secret, but now that I have my master’s degree in contemporary arts and a bunch of awards and grants, I can talk about it without being “blacklisted”. I’ve been stigmatized a lot in every acting class, by the directors in particular. I see pole dancing as a completely valid form of dance, but it’s still somewhat taboo in France. I want to be able to transform myself! Physicality is very important, this idea of being able to become somebody else.

4. The French love to criticize young artists, especially when you go against the grain.

I don’t want to have to put on hard airs, or to have to avoid being girly, or feel like I’m wearing “too much” makeup. Having a super-feminine look is a problem: people will put you in a box. In France, you’re criticized if you’re young and successful; if you happen to be a woman on top of that, then you’re really getting a raw deal. Either the guys don’t take you seriously, or the girls – who are often more scathing and vulgar – will say you got there by sleeping around! When I see a girl who asserts her femininity, I only want to be friends with her, not hate on her.

5. You seem to have a good head on your shoulders. You know what you want.

I try to subvert all the criticisms I’ve had to face. People used to say there was too much music in plays, so I started making even more music! I was also told there was too much of a dance element. I made a living from various forms of dance for over ten years, and I make music. Obviously, there is a link between the two, and that translates into physicality. Dancing is the foundation for everything I do.

6. You’re a graduate of the Fresnoy contemporary arts school. Did that help?

Well, it gave me a diploma, which in turn gave me a sort of “legitimacy” as an artist. But it also helped me become a French citizen. I have been for nine months now, but it took years of paperwork. It was absolute mental torture! They ask for papers that don’t exist, and finally I was naturalized for the most random reason. The guy from the Ministry of the Interior told me over the phone that they were very keen on giving artists citizenship, and that he’d seen me play a rebellious teen in an Oxmo Puccino music video. The track was called “Une Chance”! I kept dancing for different shows, and got a grant that allowed me to buy gear and set up my home studio. I started recording a cover of Vanessa Paradis’ “Tandem” for a dance performance. That got me a deal with Kwaidan Records, which released my first EP “L’été meurtrier” in 2018.

7. How do you relate to nightlife? Does it inspire your art?

I’ve been having insomnia attacks that have totally wrecked me since I was 12 years old. I can live like a bat for weeks at a time. I love night owls: they become my muses and friends. I love the sparkle and the fragility of the seen-and-be-seen crowd.

I get a lot of inspiration from the ambivalence. I love the night time. I love writing, working, and reading at night. I love dancing to loud, repetitive music at night. Having worked as a dancer in clubs for years, my relationship to the night is passionate: it influenced me musically by exposing me to rave music, hip hop and that sickly sweet, cheesy strip club music. It influenced me choreographically also: I was partying a lot as a teenager and made a living from pole dancing and clubbing for years, so the dance genres that come from the clubs – pole dance and other strip club moves, vogueing, whacking, hard style, jumpstyle, etc. – are the ones I draw influence from. I also mix in moves from more contemporary, neoclassical styles because I like the structure and grace they bring. So, I have an ambivalent relationship with the night time: I can be a bit excessive and passionate for a while, then I retreat. I’ll go out a bit too much for weeks, then I feel saturated and don’t go out for months afterwards!

I’m working on an album, to be released in the fall. Before that, I’ll be releasing a single, “Cousin”, one of the tracks from my “Alma” project. I want my concerts to become more immersive, like complete installations. I’m interested in creating interrelated fictions. I want to put on shows that are visuals, that present music in a theatrical way.

Regina Demina will be playing live on April 6 at the Trabendo, as part of the Les Femmes S’en Mèlent Festival.

Pop up the Champagne and put all our glitters on! Welcome to our dance club!

From ice-skating queens to the mowtown club, welcome to our Please Dance Club! Free entrance for girls who lov... 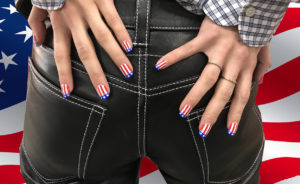 Put on your mexican boots and your fringes jacket, we will teach you how to be a real cowboy!