How did you get started in music?

My dad is a guitarist, and he signed me up for the conservatory at quite a young age. I played the drums, the flute – a bit of everything! I was born in [Parisian suburb] Mantes-la-Jolie but I moved to Biarritz at 15, while I was still in high school. There, I met this super cool chick – I was listening to Angus & Julia Stones at the time, and we started a folk duo that we called Betty Kiwi. We gained a bit of local notoriety, I remember we opened for Aaron! Then, I moved back to Paris to study and I started playing in the band Jabberwocky.

Can you tell us about Cannery Terror?

It was a garage-rock duo that I started with my friend Roxane, whom I met in high school in Biarritz. We put out an EP and a vinyl record in 2016. We were on the latest Burger Records compilation. When Agar Agar started, I would do two-week tours with Agar, then two weeks with Cannery – but maintaining two musical projects at once is impossible! Also, Rox moved to LA, and she’s getting married!

Is it important for you to work as a duo?

It’s funny, I realize that I’ve always worked that way, and I love it. Right now, I don’t see myself writing alone.With me and Armand being art students, we share an artistic sensibility that we find important, and we need to express it through our projects – musical or not. Armand only listens to electronic music, and I listen to garage. He helped me discover things that weren’t at all part of my musical spectrum, and we’re very complementary in that way.

It seems as though vocals are more like an instrument in your compositions. Can you elaborate?

Instinctively, it’s nice not to surrender to conventions – even to the point of not even considering the idea of convention. I hate being asked for a radio-ready tune. When you write a song that’s six minutes long, it sucks when they edit it down to four minutes! Why is it that they can’t play a 20-minute Pink Floyd song on France Inter? I don’t understand! Why is it that they can only play three-minute songs on the radio? It’s like this constant stream, you don’t even pay attention anymore!

The social media revolution has turned everything upside down. Do you think that is a good thing for artists?

Today’s music world is completely different. You don’t need to get on the radio to exist, you just need Instagram! But then again, the whole thing is incredibly narcissistic. When I post one of my paintings on my feed, I get 80 likes, but when it’s a photo of myself, I get 500! It’s quite a dangerous tool, it kills creativity ! Girls became famous for showing her ass on Instagram, and now they make music! Appearance is everything : everybody knows her, but no one has heard her songs.

We love women musicians and artists, but why are there so few?

Music is sorely lacking a female presence! I have a lot of friends in LA, I can’t believe how many cool girls there are there, who have this crazy onstage charisma, who have their own thing going on. I love Clementine Creevy from Cherry Glazerr, that girl is incredible! During a six-month French tour with Jabberwocky, I think I played with only one girl! Women are few and far between! I don’t understand why. All those chicks “fronting” bands are just standing there, singing into a mic. It’s revolting! But the whole thing is so beyond me that I don’t see how to change things. It’s very ingrained in our culture, and it makes women think twice about going into this industry instead of another one, which is too bad. When we released the first Agar single, people writing pieces about us would always describe us as “Armand on the machines, Clara on vocals”, even though I also write as part of this project. They’re not even pondering the idea, or they can’t even fathom it – because I’m a woman. It’s really offensive!

The Agar Agar project is getting bigger, and your first album is set to drop at the end of 2018. How do you plan on carrying on after that? Are you going to sign to a bigger label?

I had a traumatic experience with a major label, the idea makes me want to puke. You have to learn to say NO! It’s extremely hard when you’re starting out on a project. You can’t take just anything. I prefer turning down a 10,000-euro Chanel advert that I feel doesn’t represent me, even if that’s a whole lot of money. You have to find a balance – when you have your convictions, even though the money’s tight, you still have your freedom. It’s out of the question for me to sign Agar to a big label. That side of the industry has no humanity. I prefer to work with indie labels like Cracki Records, which is run by two very passionate people. I give my all to this project, and I don’t want to mess it up! I feel extremely lucky to be able to make a living from my passion. You have to believe in it, and if our album flops, it’s not a big deal. I’ll just get back on my feet and keep going.

Text and photos by Marine Neuilly 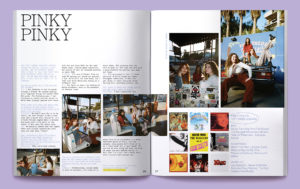 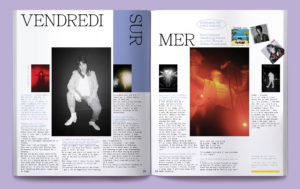 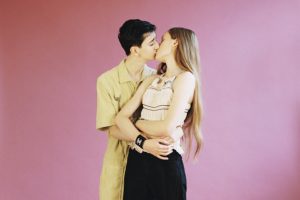 Please is crushing on… Isobel and Marco

You’ve probably spotted them gracing our Instagram page with their young love – for her fashion s... 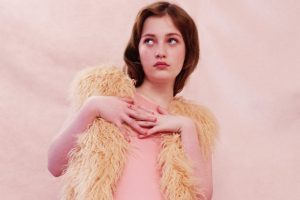 Please is crushing on… Julia

Julia, the pre-Raphaelite South-African beauty who steals the show in our “Pink is the Color of Love...