During the course of the interview, she mentions Savile Row tailoring, Iris Apfel and Beyoncé. We meet the bubbly Racil Chalhoub, founder of the brand Racil, in her London apartment.

“Women who have a strong personality and confidence are always those who wear everything better.” No, it’s not another sassy fashion quote from Coco Chanel, but a sentence proffered by Racil Chalhoub, founder of fashion brand Racil, when we meet her in her contemporary art-filled apartment in Knightsbridge (she’s a bit of a collector). The quote particularly applies to the designer, who launched in 2015 her ultra-chic line of women’s suits. During our shoot, she switches between a bubble gum two-piece (that she wears with snowy-white trainers) and a sleek suit jacket, proving that suits can have as many different styles as the wearer. “The idea that a suit has to be black is precisely one of the fashion rules I love to break,” explains the designer. “Every season, I change the colors of my suits, especially in the summer – I create them in bright or metallic hues.”

Born in Lebanon, Racil lived in Paris until her studies in fashion design take her to London. She lives in Beirut for a while, where she launches with her best friend the concept store Kitsch, but finally choses the British capital as her home. A triple culture that has come in handy: “I hope I’ve taken the best of each city: the elegance and chic of Paris, the British twist and attention to detail of the Savile Row tailors, and the glamour of Lebanese women. But mostly you gain a certain freedom and a really open mind from such a mix.” As well as a fantastic wardrobe: Prada stilettos sit alongside Charlotte Olympia clutches, blending in with a couple of personalised pieces – an embroidered Edie Parker clutch and a Maison Labiche t-shirt bearing the designer’s first name. A love of all things eclectic that we find in her references: when we ask her which icons she dreams to see dressed in Racil, she immediately replies Bianca Jagger, Iris Apfel and… Beyoncé!

Photos by Olivia da Costa and words by Fleur Burlet. 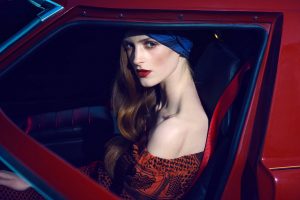 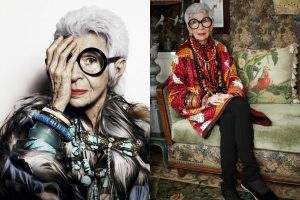 Yay! We’ve just found out that Iris, the documentary by the late Albert Mayles, of Grey Gardens fame, on... 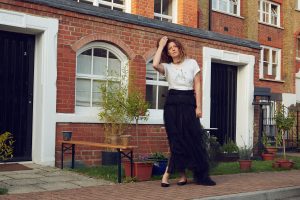 From Chanel Couture to London Fields: we meet up with Tiffany Hargraves Phillips, co-founder of jewelry brand ...