Processed with VSCO with c8 preset

A balloon explodes. The girls dissolve into peals of laughter. The Pampa Paris team is getting ready for its summer party, decorating the courtyard of their Parisian atelier with colourful balloons and small bouquets of fresh flowers. “The last time we had a party here, one of our neighbours threw a bucket of water over us!” remembers Emmanuelle. “It’s true we were pretty loud…”

Pampa has got reason to celebrate: launched in October 2016, there hasn’t been a day that the team hasn’t received an order for one of their wild bouquets, crafted by Emmanuelle, the brand’s art director, and sent all around Paris thanks to a trusty team of delivery boys. One of them, passing through the atelier, promises to come to the party that evening. “We’re super lucky to have found them,” says Emmanuelle. “As we know and trust them all, we can promise a stellar service.” Ordered online on the Pampa website, a message can be added to the bouquet, which is then hand-delivered to its destinator – and the message is read out loud. “The delivery people go to great lengths to do things properly: if the note is written in Spanish, it will be read in Spanish!” laughs Noëlie, the other half of Pampa, the CEO and financial director. “We put a lot of love in our bouquets, so they need to arrive in perfect shape. A bunch of flowers is 50% aesthetics, but it’s also a message, so it needs to be delivered with the right effect.”

From flower trucks to bouquet delivery

Both girls admit to have had a longstanding passion for flowers. Emmanuelle, who used to work in a digital communications agency, dreamt of launching her own business, and quickly realised that every one of her projects featured flowers in some way… She meets Noëlie at We Love Green, a Parisian music festival, who is in charge of its art direction: she’s in part responsible for the ubiquitous flower crowns spotted on festival-goers. At the time, she dreams of opening a flower truck. The pair decides to quit their day jobs and dedicate themselves to flowers full time. Emmanuelle joins the Ecole de Fleuristes de Paris, a prestigious florist training course: “Before that, I had no technique!” she remembers. “I used to buy flowers and make bouquets at home on Sundays. Sometimes it looked good, sometimes it took hours and never worked out!”

Since opening Pampa, she visits the flower market at Rungis twice a week – arriving at 3am to get the best blooms – brings back her weekly selection, writes down a recipe – “like a restaurant!” – and starts making the bouquets, posting the weekly creation on their website, available to be ordered. The choice of only working with a strict selection of flowers allows the team to control their stock more easily and limit waste. And then go crazy on the content of the bouquets, which often feature more than 10 varieties of plants: “The name Pampa is a direct reference to wilderness: we like bouquets that are full of life, not as static and traditional as old-school florists,” explains Emmanuelle. “We always look for something a bit unusual – a flower that feels like silk, or looks like feathers. We want to pick things that people aren’t used to seeing.”

Unsurprisingly, their biggest success was Valentine’s Day. The calendar played in their favour: on Valentine’s evening, Paris played Barcelona in a decisive football match… “We got loads of orders with messages such as ‘I’m sorry I’m not here tonight’ or ‘Sit on the sofa and admire these beautiful flowers, I’m on my way!’” remember the girls. What messages do they get the most? “‘I’m sorry, come back to me!’” laughs Emmanuelle. “But we also get a lot of professionals ordering bouquets to thank a client for a business deal or partnership.” If their clientele first consisted of their circle, trendy 25-to-30-year-olds from the digital and creative industry, Pampa now caters to all sorts of flower lovers, and their audience is constantly widening. “Flowers make you feel good,” says Emmanuelle. “We’ve always been surrounded with flowers, it’s really something that’s important to us – especially when you live in a polluted city like Paris!”

Read more about Pampa Paris and order your fresh & unusual bouquet in 3 clics! 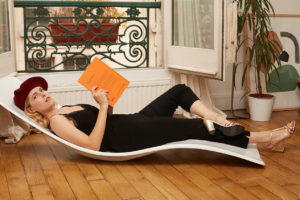 Our #PleaseGirl this week is the DJ and sound designer Inès Melia. Inès has started her career at le Baron... 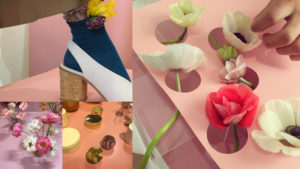 A day in the life of… Gaëlle, Visual Director at Les Néréïdes

Spring is coming, and we are craving flowers! Not to worry – for the second episode of our A Day in the ... 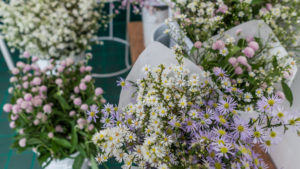 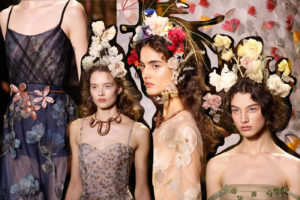 The best of spring 2017 couture

The couture shows have just come to an end in Paris, and we’ll admit we were grateful for a bit of respi...